Protesters gathered outside Mr Laundrie’s house on Thursday and plan to return on Friday, hoping to pressure him into cooperating with law enforcement. Ms Petito’s family called on Mr Laundrie’s family to help them find their daughter.

The Petitos asked the Laundries “as parents, how can you put us through this pain” and begged them to at least tell them where Ms Petito was left, or if they are even looking in the right area. The family also revealed they do not believe Ms Petito’s final text message on 30 August actually came from her.

A couple claims they saw missing YouTuber Gabby Petito’s van near Jenny lake in Grand Teton National Park in Wyoming. The couple said they saw the van on 25 August, narrowing the potential search area for investigators if they deem the tip credible. The couple did not see Ms Petito or her fiancé Brian Laundrie. However, Ms Petito did tag numerous potential campsites on an app called The Dyrt, which may provide insight into the general area she planned to explore on her trip. 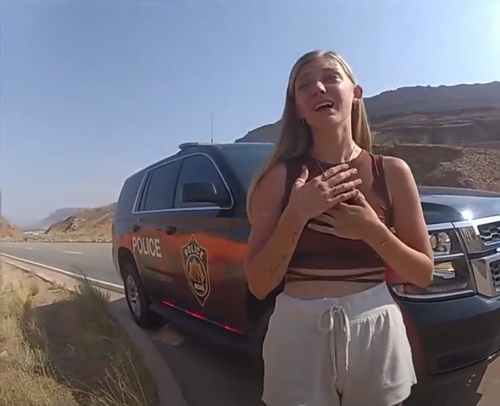 Ms Petito and her fiancé were reportedly arguing and hitting each other, according to a police report from Utah. The couple, who were on a road trip in Ms Petito’s van, were spotted having an argument in Moab City, Utah on 12 August. Bodycamera footage of a police encounter with the couple shows Ms Petito crying over the argument she and Mr Laundrie had been having during their trip.

On Wednesday, the North Port Police Department in Florida announced they were treating Ms Petito’s fiancé as a person of interest in their investigation. He has thus far refused to cooperate with law enforcement.

Ms Petito disappeared while on a road trip with her fiancé, Mr Laundrie, who returned without her, prompting a frantic search for the 22-year-old woman that began on 11 September.

When her daughter did not check in after Mr Laundrie returned early from their road trip, she grew concerned and eventually the family alerted the police.

So, what was the nature of Ms Petito and Mr Laundrie’s relationship?

Speaking with NBC2, Ms Kalanich said that the couple seemed to be happy and excited about their trip. She added that they “always smiled”and said that the two were “couple goals”.

But this morning, Cassie Laundrie told Good Morning America that the fight between Ms Pepito and Mr Laundrie in Moab, Utah, where Ms Pepito is crying, was “typical” for the couple.

“It looked typical of both of them,” she said. “Whenever they would fight, they would take a little break and come back and be fine.”

In the video, the couple admit that the stress of travelling together in the van had led them to argue more often. According to the police report, the couple were arguing and hitting each other when they arrived.

The officers who responded to the incident determined that it was a “mental health break” rather than a domestic assault situation, and advised the couple to separate for the evening.