“I need someone to show me my place in all this.” You and us both, Rey. Star Wars: The Last Jedi has unveiled its latest trailer, and the two-and-a-half minute glimpse of writer-director Rian Johnson’s installment hinted at betrayals, reversals, at least one major (and all too real) death … and the possibility that the young Jedi in training played by Daisy Ridley may be on a one-way trip to the Dark Side. 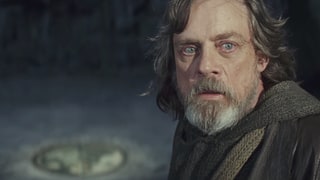 Narrated by Supreme Leader Snoke (Andy Serkis, the DeNiro of CGI creatures), the trailer’s opening segment unveils an array of impressive new hardware, from a phalanx of souped-up four-legged AT-ATs to a new lightsaber for Rey in a never-before-seen color: white. Its blade makes for a sharp contrast with the blood-red background behind Snoke’s apprentice Kylo Ren (Adam Driver), who reaches for his own weapon as his mentor praises his “raw, untamed power – and beyond that, something truly special.”

From there, we cut to Rey and her own teacher, Luke Skywalker (Mark Hamill), looking and sounding more like a strange old hermit than Obi-Wan and Yoda ever did. “Something inside me has always been there – then I was awake,” says the protégé, supporting the theory that her uncanny abilities in The Force Awakens emerged from a period of forced dormancy.

Whatever it is, it’s strong enough for her to literally crack the earth beneath them. “I’ve seen this raw strength only once before,” Skywalker says gloomily – an apparent allusion to his nephew Ben “Kylo Ren” Solo – as we flash back to his robotic hand emerging from fiery rubble. “It didn’t scare me enough then. It does now.”

Based on what Kylo says next, it probably should. “Let the past die,” he instructs, sporting high-tech stiches across his face from where Rey scarred him in their lightsaber duel in Episode VIII. “Kill it, if you have to. It’s the only way to become what you were meant to be.” In the apparent sights of his fancy TIE fighter during this monologue: his mother, General Leia, aboard a seemingly doomed Resistance starship. As he reaches for the trigger button, the Knight of Ren’s eyes well with tears; given actress Carrie Fisher’s heartbreaking death since those images were shot, he’s probably not the only one.

Then it’s off to the (pod)races. The Millennium Falcon speeds through a crystalline black-and-crimson cavern, enemies in hot pursuit. Its copilot Chewbacca roars – and a brand new, ridiculously adorable new critter who looks like some kind of calico space Pokémon, screeches in response. Ex-stormtrooper Finn (John Boyega), awake from the medically induced coma he was in when last we saw him, duels with his former boss Captain Phasma (Gwendoline Christie).

Ice foxes of some kind dart around in the snow. Ships crash into clouds of red smoke in the desert. Luke and Rey get wet in what looks like an underground lake beneath their island hideaway. “We are the spark that will light the fire that will burn the First Order down,” says Poe Dameron (Oscar Isaac) in full rally-the-troops mode. “This is not going to go the way you think!” Luke snarls, as if in response.

Then comes the big meeting of Dark and Light you were looking for, but it doesn’t go down the way you think. Yes, Rey gets Forced around by a yellow-robed Snoke, the way you might expect a messiah to be when she faces a dark lord ordering her to “Fulfill your destiny.” The shock is saved for the end. “I need someone to show me my place in all this,” Rey says – not to Luke, but to Kylo Ren. Scarred face healing, he looks at her … and offers her his hand. This is Star Wars, so she could well cut it off instead of taking it, but we’re not hopeful. 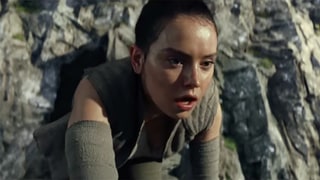 Which is no doubt the point. The Last Jedi occupies the equivalent position in this new trilogy as The Empire Strikes Back, one of the most resolutely downbeat blockbusters ever released. Rian Johnson is no stranger to that bleak emotional palette – the man directed Breaking Bad‘s devastating final-season episode “Ozymandias.” When you add these hints at a heel turn from Rey with those grim fourth-wall-breaking shots of Carrie Fisher’s warrior princess on the verge of death, at the hands of her own son no less, the Dark Side is strong with the result.

Still, this is Star Wars Episode IX, not The Godfather Part II. The new AT-ATs, lightsaber, and little furry cute thing are all in keeping with the franchise’s fun side. Meanwhile, the Finn/Phasma fight and the Falcon flight remind us that from A New Hope‘s Death Star attack run to The Phantom Menace‘s “Duel of the Fates” to Rogue One‘s suicide-squad beach battle, this saga has always blended sci-fi/fantasy with rock-solid action filmmaking.

Finally, the still-mysterious temple-like structure inside Luke’s island promise revelations about the Jedi and the Force that fans have hungered for since the Carter administration. They’ll have to hunger a little longer, of course, at least until The Last Jedi debuts on December 15th. But with tickets going on sale tonight, this trailer makes for a heck of an appetizer.

Keith Urban to Be Featured Speaker at SXSW 2018