Now the Siberian and the scandalous rapper Aljay, together with his wife, the millionaire blogger and the host of Eagle and Tails, Anastasia Ivleeva, are considered one of the most beautiful and outrageous couples in the country.

Millions of subscribers are closely following the development of their relationship, predicting that the couple will either cool or increase. It is interesting that the union of young celebrities is quite predictable, they are both from simple families and achieved fame and prosperity solely on their own.

Nastya was born in St. Petersburg, and Alexey was born in Novosibirsk. The editors of the NGS collected old photos of the stars and made sure: they could have become a great couple, even if they had met 10 years ago.

While studying at the institute, TV presenter and blogger Nastya Ivleeva worked as a manicure master and hostess in various institutions.

But the fact that she was always groovy is a fact. In the future, it is the humorous vines that she will begin to shoot for instagram that will bring her all-Russian fame.

In 2015, the still unknown Ivleeva moved from St. Petersburg to Moscow, where she got a job as a manager in a salon that sold cars. Then the girl started to instagram. The idea to shoot videos and upload them to the network to Nastya was thrown by her ex-boyfriend, a member of the Star Factory and the lead singer of the Chelsea group, Arseny Borodin. He helped the girl find a job in Moscow. The couple met in 2011, when the TV presenter worked as a hostess in one of the St. Petersburg restaurants.

Aljay’s future passion not only improved in her career, but also changed outwardly, in many archive photos Nastya is a brunette. 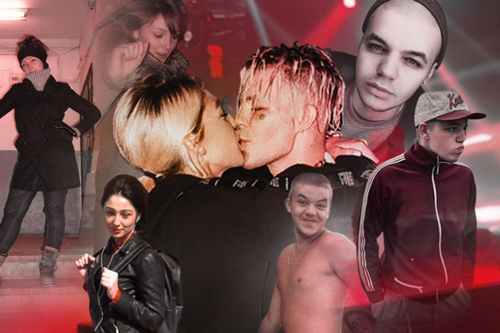 A golden blouse, a simple kitchen, dishwashing detergents in the background – this girl can hardly be recognized as today’s host of Eagle and Tails. Nastya is not afraid to laugh at herself, many hide their old and unsuccessful photos from the public, while the blogger herself shared them on social networks, which caused a wave of approval and support from subscribers.

To have something to compare with – let’s go back to 2021. Fresh photo of the TV presenter who leads her show on YouTube and drives around Moscow in a brand new Lamborghini.

In contrast, let’s look at the favorite genre of the early 2000s – a photo at the entrance. Admit it, does everyone have such shots in their albums? The stars are no exception.

And here is our favorite. Nastya commented on this photo on her blog as follows: “The others (photos), where I have black hair, puffy poles and chubby cheeks, I just moved to Moscow”.

The good guy in the hat or the bad guy?

Now let’s look at the archival photos of Nastya’s husband, the popular rapper Aljay. Alexey Uzenok (real name of a celebrity) was born and raised in Novosibirsk. Here he studied at school number 33 on Lineinaya Street (now it is the 9th gymnasium). Aljay was not a notorious bully or a thunderstorm of a gateway – he studied well, in the certificate there was only one triple.

Alexey was plump and modest – if you go to any Russian school now, you will see a lot of such guys in the corridors. In high school, he became interested in rap and changed his style of clothes, but still remained a pleasant and non-conflict guy, as teachers recall. When they asked him to dress decently, he did not argue, and the next day he showed up at school in a black classic suit. Later, Alexey tried to create a reputation for himself as “bad and evil”, saying that he graduated from only 9 classes. But we know that Lesha diligently finished his studies until the 11th.

Now Aljay can only occasionally be seen in his wife’s story without the legendary white lenses.

A year and a half ago, Aljay and Nastya Ivleeva got married.

– It was all very modest … I didn’t have a dress … Nobody planned anything. Everything turned out very spontaneously, even the painting itself … They signed, came home, drank wine, went to bed … Friends were not offended, because we are not the people who create some kind of event around this. This is our personal, wonderful event, – the host of “Eagles and Tails” commented on her wedding in a conversation with Ivan Urgant.

Before legalizing the relationship, Ivleeva and the rapper met for more than a year. On March 8, he released a new video for the song California, which he dedicated to his beloved (at least, fans think so). A year later, Aljay gathered his whole family at a concert in Novosibirsk, even his grandfather came. On it, a shocking Siberian confessed his love to Novosibirsk.