The midfielder had walked out to a guard of honour and on 80 minutes strode off the turf for the last time to a standing ovation. Carrick will join José Mourinho’s coaching staff, the Portuguese indicating he will one day be his new No 2, following Rui Faria’s departure in the summer.

Carrick said: “I have to thank the manager an awful lot. It is an unbelievable opportunity for me. I look forward to learning off him, he is one of the very best. I am sure he will teach me a few things and we will have some success in the near future, I am certain of that. We will give everything we can to bring the FA Cup back here next week.” 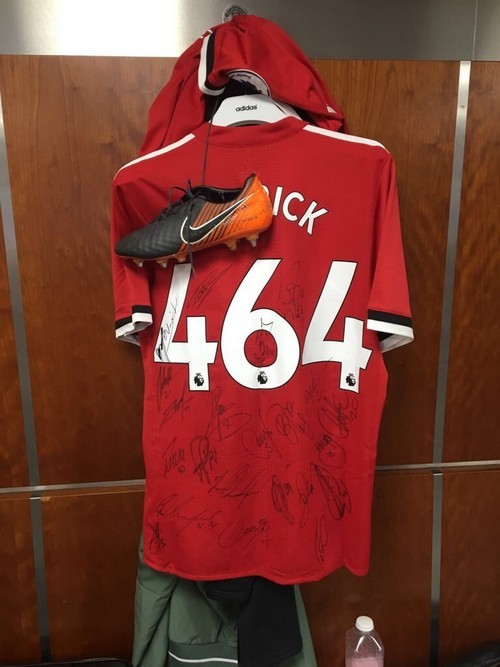 “The particular reason is I think it will be Michael Carrick in the future when he has his badges, pro licence, when he makes the bridge between being a player to an assistant. Because people think it is just like one day I’m a player and the next I’m a coach. It is not like that.

“I have nobody in the world of football ready to be my assistant manager, so I prefer to educate people to structure my staff in a way where there is education and improvement. I am going to improve my staff in the performance level and in relation to the tactical work, I am going to bring some people that until this moment have not come with me yet.”

This first home game since Sir Alex Ferguson’s brain haemorrhage featured a note of best wishes in the programme, and the home crowd rising midway through the second half while chanting: “Stand up for Alex Ferguson”.

Victory for United was their 25th in the league and took them to 81 points and with second place already secured thoughts turn to the Cup final, for which Anthony Martial is a doubt, though Romelu Lukaku will return to training this week following an ankle problem.

The headline news here was Martial’s unavailability because of a knee problem, with some confusion regarding whether he was seen driving from the ground just before kick-off.

Mourinho said: “He was injured, he was injured Friday training session, yesterday Saturday couldn’t train. He had treatment in the morning at the training ground and he stayed away today. I don’t know about the final. I know Romelu will be back for Tuesday and we have to see.”

Javi Gracia’s selection showed three changes to their previous game, as Heurelho Gomes, Gerard Deulofeu and Richarlison came in for Orestis Karnezis, Étienne Capoue and Troy Deeney. Despite the defeat his side finished 14th and the Spaniard indicated he will remain in place next season. “I think so,” Gracia said.

Sign up for The Fiver and get our daily football email.

Carrick’s first intervention was to slide in on Roberto Pereyra but he was left flailing as the visiting midfielder evaded the challenge and Watford turned defence into attack.

United needed 11 minutes to claim a first corner. Daley Blind, making a first league start since August, swung in the kick, the ball reached Juan Mata who found Rashford, and the striker blazed high from 25 yards.

When Mata next popped up this was on the left, the Spaniard finding Sánchez as he pulled away at the far post. Yet though the ball fell sweetly on his right boot, the Chilean’s volley was wide.

Next came a moment that summed up United’s season. Mata hit Rashford first time along the right and he did the same, firing the ball into the area. It had Watford scrambling and stood out as a rare move of slickness and pace: a scarcity of this has proved the unwanted trademark of Mourinho’s side this year.

Now, though, came Carrick’s rewinding of the clock, as he slid a 40-yard ball on to Mata’s left boot. He passed right to Rashford and the 20-year-old collected a 13th goal of the campaign.

Carrick featured in United’s opening foray in the second half though his shot was blocked. A Watford move came via Andre Gray when the centre-forward took possession outside the area, though he was soon stymied.

Later, a Rashford pot-shot sailed over the bar and Watford had a mini-flurry in and around United’s area, before Carrick’s farewell.

Always a classy operator, he ended with a classy sign-off, patting the badge and offering a goodbye clap as a thank you to the crowd, closing a gilded 12 years at Old Trafford. Carrick said: “It’s the greatest club in the world and I thank you for your support.”

The economic value of football goals