The joint strategic Zapad-2021 drills will involve up to 200,000 troops, 760 tanks and multiple launch rocket systems, as well as 80 aircraft and 15 warships, according to the Russian Defense Ministry.

Russia and Belarus on Friday kicked off what are described as Europe’s largest military exercises in decades amid soaring post-Cold War tensions between the two allies and the West.

The Sept. 10-16 exercises will be staged across nine Russian and five Belarusian ranges and bases.

Footage published by the Russian Defense Ministry showed warships and tanks firing salvos and warplanes taking off and flying in formation.

“The objectives of the exercise are to check readiness levels and the Belarusian and Russian military command bodies’ ability to jointly ensure military security and territorial integrity,” it said in a statement.

Zapad-2021 will also test the militaries’ “interaction during combat operations and letting commanders and staff practice troop management during joint actions in repelling aggression against the Union State,” the Russian military added. 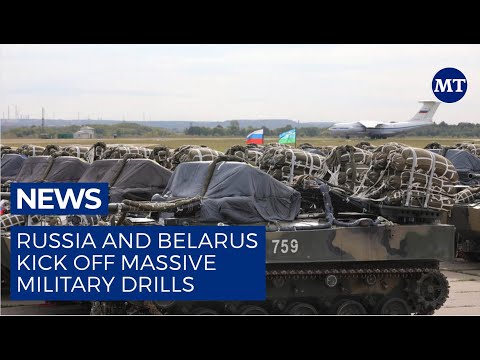 The union state refers to a formal economic and political integration between the two ex-Soviet allies.

NATO said it was not invited to send observers to Zapad-2021 and called on Russia and Belarus to “act in a predictable and transparent way.”

“This is especially important when there is increased military activity along our borders, to reduce risks and avoid any accidents or incidents,” NATO spokeswoman Oana Lungescu told RFE/RL.

Lungescu added that observations are mandatory under a 2011 OSCE Vienna Document when exercises exceed 13,000 troops. Russia’s Defense Ministry contends that fewer than 6,400 troops will be under a single operational command in Russia in line with the document.

Military analysts said they expect a range of outcomes from Zapad-2021, including electronic warfare equipment jamming neighboring countries’ GPS signals and the Russian military permanently remaining in Belarus after the drills are over.

“We know that Russia has wanted to expand its military footprint in Belarus, and this exercise may give us an indication of what Belarus would allow,” analyst Robert Lee told RFE/RL.

“It could also involve greater integration of Russian and Belarusian military and security services to put down a Color Revolution-type scenario in Belarus,” Lee added.

On the eve of the joint exercises, Russian President Vladimir Putin and his Belarusian counterpart Alexander Lukashenko announced they had agreed to deepen economic integration as part of the two countries’ 1999 “union state” agreement.

Putin noted that the “union state” envisions deeper political ties between Russia and Belarus, which includes a single parliament, currency and common state symbols. He clarified, however, that he did not discuss political integration with Lukashenko on Thursday.