The hardline Islamist group seized control of the Afghan government in August following a lightning-fast offensive that coincided with the United States’ withdrawal of troops that ended its 20-year war.

Russia’s presidential envoy to Afghanistan, Zamir Kabulov, told journalists that a Taliban delegation has been invited for Afghan talks in the Russian capital on Oct. 20, the state-run RIA Novosti news agency reported.

Kabulov did not specify who exactly will represent the Taliban at the so-called “Moscow format” talks. RIA Novosti reported last month that Russia was in talks with the Taliban on sending their delegation to Moscow sometime in the future.

Russia has invited the Taliban to attend negotiations on Afghanistan in Moscow later this month, the Kremlin’s envoy to Afghanistan said Thursday. 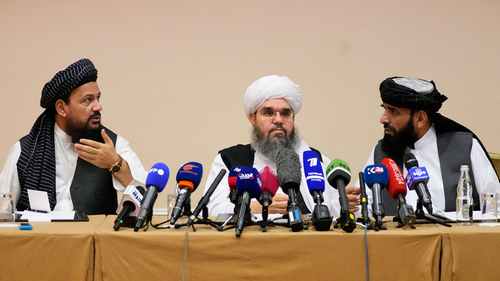 The talks will follow a G20 summit on Afghanistan on Oct. 12 that will seek to help the country avoid a humanitarian catastrophe in the wake of the Taliban takeover.

Kabulov was also asked whether Russia would deliver aid to Afghanistan, where the humanitarian crisis is growing worse, a top UN official warned Wednesday.

Russia would do so, but the details were still being decided, Kabulov said.

“This is being worked out,” he told journalists, saying “cargo” was being collected.

Moscow has in recent years hosted Taliban delegations for a series of talks attempting to mediate peace with the Afghan government, which crumbled with the militant group’s offensive. The latest trip took place in July, one month ahead of the Taliban’s overthrow of the government.

The Kremlin has been cautiously optimistic about the Taliban since its takeover but has stopped short of recognizing it as a legitimate government. The group remains formally banned in Russia.

The Russian military has carried out several live-fire exercises at its base in Tajikistan, an ex-Soviet republic that shares a nearly 1,500-kilometer border with Afghanistan, since the Taliban’s takeover.

The U.S. accused Russia of offering the Taliban bounties to kill American troops in Afghanistan, a claim that Moscow has denied.