Ricky Burns admits he did not do enough for victory against Anthony Crolla but wants a second chance at beating the Englishman.

Scotland’s only three-time world champion suffered a blow to hopes of kick-starting his career when he suffered a narrow loss to Crolla on Saturday night. 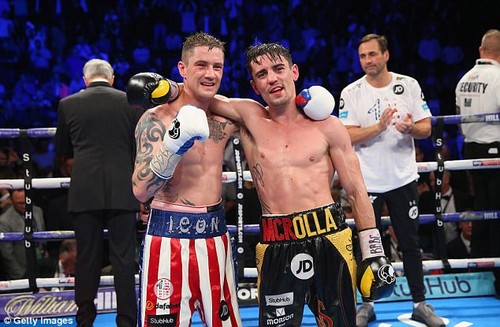 Yet the Coatbridge lightweight hopes to do it all over again and took to Twitter to call for a rematch.

Burns looked dejected as Crolla’s arm was raised in the ring at the end of the fight and claimed afterwards he felt hard done by.

However, he has now confessed the best he could have hoped for was a draw.

‘What a fight me and @ant-crolla had, just watched it back,’ he posted. ‘On the night, I thought I’d done enough! But watching it back I scored it a draw.

‘What an atmosphere in there and thanks for all the messages. Let’s get this rematch sorted.’

Former WBA champion Crolla has already set his sights on a third fight with Jorge Linares after back-to-back defeats to the Venezuelan star.

But he has refused to rule out a return clash with Burns in Glasgow.

‘It is certainly a possibility,’ he told talkSPORT. ‘We will look forward to what makes the most business sense.

‘Obviously the aim is to become a world champion again and whichever fight gets me into a position to fight for a world title, that is something I would do.’