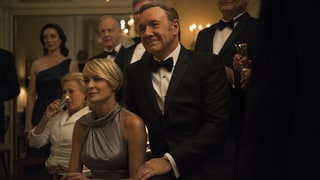 Netflix’s announcement comes a day after Rent star Anthony Rapp revealed a 1986 incident where Spacey made sexual advances on the then-14-year-old actor. Despite the timing, a Netflix spokesperson told The Hollywood Reporter the decision to end House of Cards after its sixth season was made months ago.

“In response to last night’s revelations, executives from both of our companies arrived in Baltimore this afternoon to meet with our cast and crew to ensure that they continue to feel safe and supported,” the companies said. “As previously scheduled, Kevin Spacey is not working on set at this time.”

House of Cards‘ 13-episode sixth season is currently in production in Baltimore. Spacey won a Golden Globe Award for Best Actor in a Television Series Drama for his work as Frank Underwood.

Former House of Cards showrunner Beau Willimon said of the accusations against Spacey, “Anthony Rapp’s story is deeply troubling. During the time I worked with Kevin Spacey on House of Cards, I neither witnessed nor was aware of any inappropriate behavior on set or off. That said, I take reports of such behavior seriously and this is no exception. I feel for Mr. Rapp and I support his courage.”

Spacey apologized for his actions and came out as gay in a statement soon after Rapp’s account was published Sunday night; GLAAD and actors Zachary Quinto and George Takei were among those to criticize the timing of Spacey’s revelation.

All of the News From This Weekend’s Frontier Expo 2017